Warren Buffett is known as perhaps the greatest stock investor of all-time. By his own account, Buffett spends hours (and days) at a time pouring over 10-K reports and other financial information to understand a company’s business and how much it’s worth. He’s a numbers man, first and foremost.

But after reading his latest Annual Letter to Shareholders, another trait about Buffett becomes immediately obvious. He’s a people person, too.

In this latest letter, Buffett recounts his most successful acquisitions not by citing his own investment prowess but instead crediting the people who started the firms (and continued running them after joining Berkshire), from Mary See (See’s Candy) to Leo & Lillian Goodwin (GEICO). These were far from number-only decisions, and instead a bet on the entrepreneurs themselves. In many cases, according to Buffett, he never even asked for audited financial statements before acquiring the firms.

So what can we learn from Buffett in this regard? Perhaps as stock investors, we should focus more on who is running the business, versus just the business itself.

Take Microsoft as an example.

During Bill Gates incredible tenure as CEO (and of course, Founder) of Microsoft as a publicly traded company (1986 – 2000), Microsoft returned an astounding 58% per year to shareholders. However, those stellar returns came to a screeching halt almost the minute Gates’ successor (Steve Ballmer) was crowned. Known for failed acquisitions, and failing to understand the threats posed by both Apple and Google, Microsoft actually lost 0.5% per year under Ballmer’s more than 14 year tenure as CEO (2000-2014).

In 2014, however, Microsoft made a change at CEO, hiring Satya Nadella. Nadella transformed the company, focusing on cloud computing (Microsoft Azure) and Office 365 (subscription-model), making Microsoft once again the world’s most valuable company. Under Nadella’s tenure, Microsoft has so far returned 33% per year (not bad for a company worth more than $1.7 trillion!)

The chart below says it all. While stock investors tend to focus on the numbers, we have to remember: people matter, too. 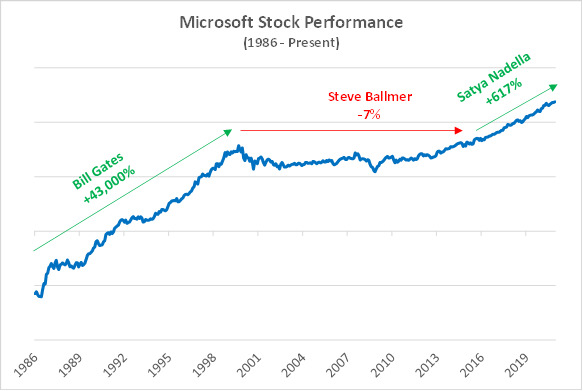