It’s never too late to teach an old dog new tricks. That is certainly the case with General Motors and Disney, two century-old companies that are now embracing new technologies to completely re-shape their businesses; and Wall Street is beginning to take notice.

Let’s start with GM. From the time GM emerged from bankruptcy after the Financial Crisis in December 2010 up until August 2020 (nearly ten years), GM stock returned exactly nothing (and this includes dividends). In other words, an investor in GM completely missed one of the greatest bull markets in history. However, since August of last year, GM is up more than 80%! What’s changed? GM has gone all-in on electric vehicles, declaring that all of its vehicles will be electric by 2035.

Did GM’s leadership make this decision out of concern for the environment? Maybe in some small part, but this was first and foremost a business decision. The chart below compares the stock performance of GM with Tesla since December 2010. While GM’s decision to eliminate gas powered vehicles by 2035 made headlines, the right question to ask isn’t why would GM do this, but what took so long? 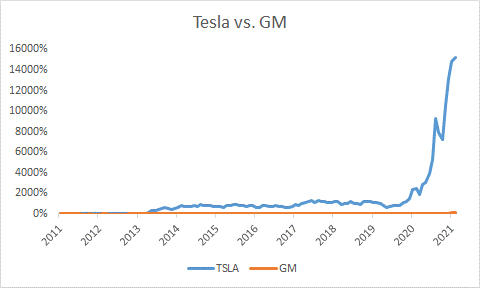 Next, let’s look at Disney. Faced with an upstart competitor in Netflix, Disney was forced to make a difficult decision: keep doing things the way it always has, or embrace a new technology. The answer was clear (certainly made easier by the pandemic), and Disney went all-in on streaming. The strategy is now paying big dividends as Disney+ has passed 90 million subscribers, nearly three years ahead of schedule.

While Disney should be reeling from the pandemic with theme parks and movie theaters closed, the company is thriving thanks to its streaming platform. Disney stock fell nearly 40% at the start of the pandemic but has now climbed all the way back and is within striking distance of Netflix over the past year. 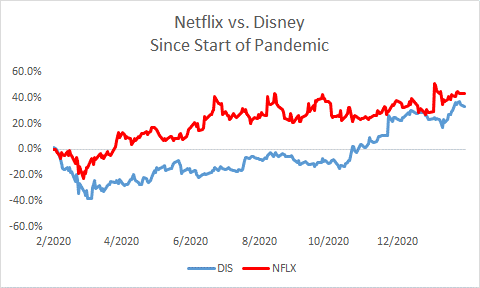 While history is full of Blockbusters and Kodaks that failed to embrace change, these two firms are charting a new course. As of now, this also looks like a winning strategy for their investors.