In our first blog post on the election, we showed that the market may be predicting a Trump loss based on the fact that stocks have been trading down since the end of the second presidential convention (historically a bad sign for the incumbent).

In our second blog post, we showed that, while the President has levers to pull that could influence the economy, the executive branch has much less impact than you probably think. The Federal Reserve (which independently sets interest rate policy) remains far more important.

Since the Fed has committed to keeping interest rates low for at least the next few years, we believe the stock market can still rise next year no matter who occupies the White House. Obviously that’s not to say the election won’t have any impact on markets next year. In particular, Biden and Trump’s differing views on taxes are likely to create clear “winners” and “losers” in the immediate aftermath of election day.

In this blog post, we’ll summarize Biden’s tax proposals most likely to drive the stock market, and how we’re positioning your portfolio ahead of time. For a complete rundown on Biden’s tax proposals and their financial planning implications, you won’t want to miss Tony’s recent client-only blog “Election Year Income Tax Alert”.

To start, Biden is not proposing across-the-board tax increases. In fact, many middle class taxpayers may see their tax liability cut further (particularly in high tax states such as NY, where the SALT deduction may be reinstated). However, very high earners and corporations are clearly at risk of seeing their taxes go up.

The signature proposal of the Biden tax plan is to raise the corporate tax rate to 28%, from 21% (thus cutting Trump’s corporate tax cut in half). Additional corporate tax proposals include:

At the individual level, Biden is clearly targeting those well above any definition of the “Middle Class:”

All else being equal, higher corporate taxes will clearly have an impact on corporate earnings and therefore, the stock market. In the five months following the passage of the Tax Cuts and Jobs Act in 2017, U.S. stocks rose approximately 15%. Here we’ll look at the big winners following the passage of the President’s tax cuts for clues as to the big losers should the tax cuts be reversed.

Foreign stocks easily beat U.S. stocks at the start of Trump’s presidency, rising nearly 17% (versus 11% for U.S. stocks) from January 2017 through to September 2017 (when the passage of the tax cuts was assured). We define this period as “Pre-Tax Cut” in the chart below.

While foreign stocks currently make up a relatively small portion of your portfolio, we have a bias to increasing your exposure should Biden win. 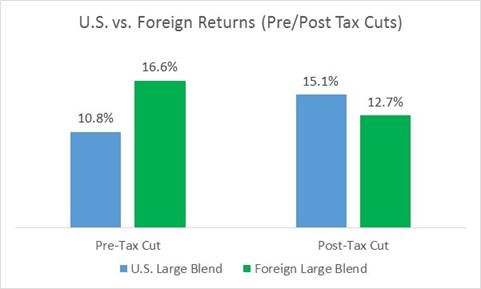 For the sake of simplicity, there is one major difference between growth and value stocks: Growth stocks are not as reliant on the health of the overall economy. As a result, all else being equal, value stocks tend to outperform growth stocks only when the expectations for economic growth are rising.

As you can see below, growth stocks easily beat value stocks pre-tax cut (in fact, growth stocks have beaten value for much of the last ten years). However, when the tax cuts were passed in 2017, value stocks outperformed as expectations for overall economic growth increased.

If Biden wins, we believe value stocks would lag growth stocks as the market would at least temporarily lower expectations for economic growth. We continue to overweight growth stocks in your portfolio. 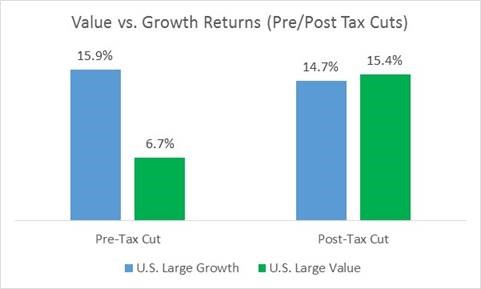 Finally, the chart below shows the difference in pre- and post-tax cut stock returns by industry. A positive stock return here (green bar) means the industry’s return was better following the tax cut, than before.

Not surprisingly, industries that saw the biggest post-tax cut jump in share prices were those seen to benefit from a higher growth economy, such as energy, financials, and consumer cyclical firms. The biggest losers were industries such as health care, and utilities, that are not as impacted by changes in economic conditions.

We believe a higher corporate tax rate will likely result in the opposite taking place, with noncyclical industries outperforming, and more cyclical names falling behind. Technology (outside of the FANG stocks) and health care remain our largest overweight positions, and we think will continue to do well should Biden win. 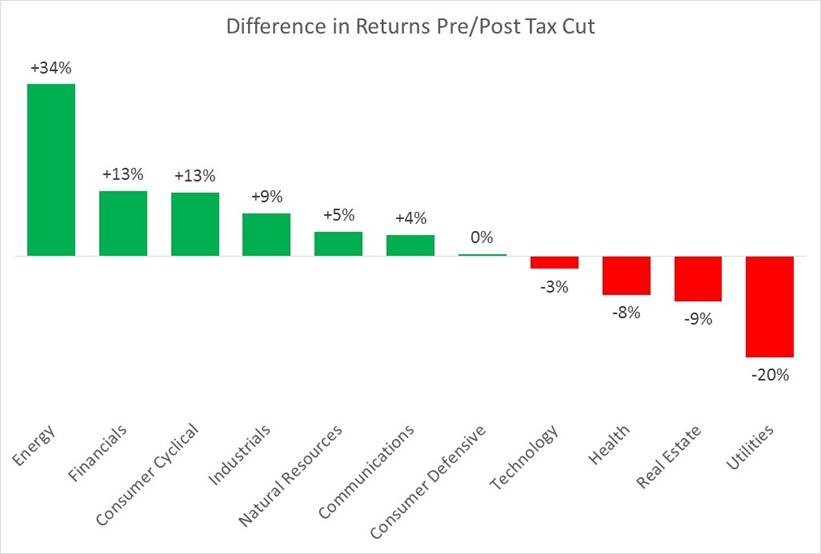 While this election will have consequences for the stock market, it’s imperative not to overact. A Biden victory does not mean impending doom for the stock market, nor does it mean that his tax proposals will be implemented as they stand now, or even at all, should the Democrats fail to take the Senate.