A week away from the election and investors everywhere are making bets on who will win. A bet on Biden is a bet on clean energy and cannabis. A bet on Trump is a bet on fossil fuels and big banks.

The merits of these investment themes (even should the candidate win) are shaky at best. While banks and energy sectors soared when Trump was elected based on expectations for tax cuts and deregulation (which the president delivered), the biggest winner during his presidency was none other than big technology firms. One of which, Google, is currently being sued for anti-trust violations by his Justice Department (the stock is up 10% since the news was announced).

Why the disparity between policy and stock performance? While a president’s policies can impact certain sectors, the business fundamentals still win out. While banks did benefit from lower taxes and deregulation, they were also crushed by low interest rates. Likewise, fewer environmental protections surely helped big oil, just not enough to compensate for a 25% drop in oil prices.  While anti-trust regulation is not good for Google, the company’s business is not only unaffected by the pandemic, but in some ways, helped by it.

That said, there is one sector, we believe, that may be worth betting on in this election. A sector that a president may not just be able to impact, but better yet, completely drive the business fundamentals; and the best part is, it doesn’t really matter who wins.

In this blog post, we’ll detail why the need for infrastructure is so great in the U.S. (both candidates are proposing huge spending increases), and why now may finally be the time when a bill gets passed. In future blog posts, we’ll discuss how we soon plan to take advantage of this investing theme in your portfolio.

According to a recent report, more than 50,000 bridges in the U.S. are considered “structurally deficient”. Drinking water systems were built decades ago and may begin to pose health risks (i.e. Flint, Michigan). Driving in Buffalo in the winter, we are all too aware of roads in desperate need of repair. We are the wealthiest country in the world and yet our infrastructure lags behind other nations. Why?

For starters, public infrastructure spending has been on the decline since the 1960’s. 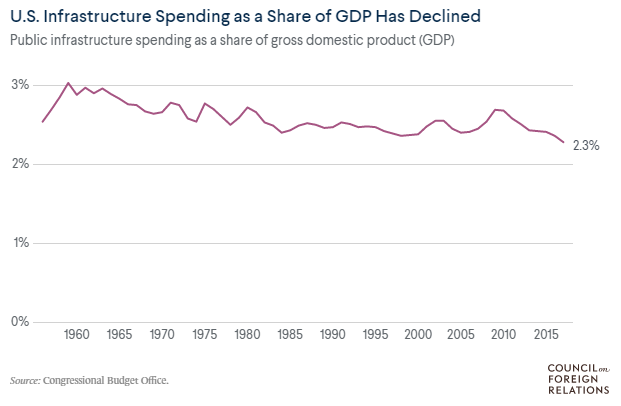 We are different than other nations in that the Federal government plays a limited role in infrastructure spending, instead relying on State and Local governments. Federal spending is primarily funded through the gas tax, which has not increased in two decades. Low fuel prices like the present are an ideal time to raise gas prices anywhere from 10-25 cents per gallon. The public resists tax increases, yet they fail to realize that terrible roads causing damaged tires and rims, not to mention commuting delays, are another form of taxation. 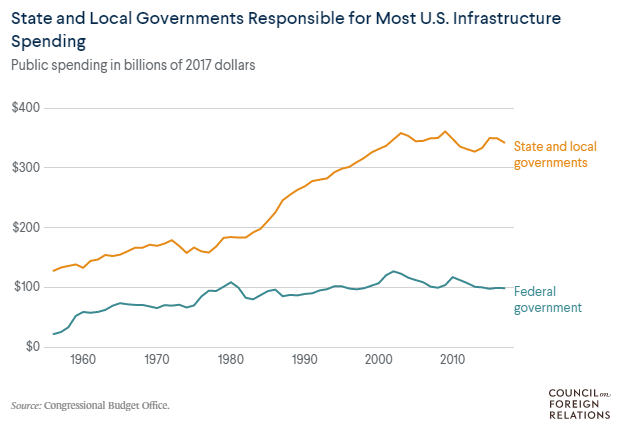 Why the Pandemic Presents An Opportunity

Why We Are Bullish On A Big Infrastructure Bill:

And finally, both candidates have made infrastructure spending a priority in their campaigns. While the winner will ultimately determine the implementation (more direct investment from the federal government, or a reliance on public-private partnerships), we are likely to see some sort of infrastructure bill no matter who wins the election.