Business sentiment is an important metric to watch in gauging the future direction of the U.S. economy. One way to measure sentiment is to analyze companies use of their cash flow, meaning are they reinvesting in their business in pursuit of new growth opportunities, or diverting it elsewhere in the absence of opportunity?

The below chart shows how U.S. non-financial companies are using their cash flow over the last twelve months, compared to prior years. While operating cash flow is indeed higher over the last twelve months versus 2017 (thanks to the tax cut and subsequent higher economic growth), capital expenditures growth has been muted, rising just 9%. So where are companies diverting their cash flow? Share buybacks are up an astounding 40%.

While certain provisions in the tax cut were meant to spur higher CapEx spending, so far, it hasn’t materialized. While just one piece of the puzzle, this may portend lower earnings growth ahead for U.S. companies. 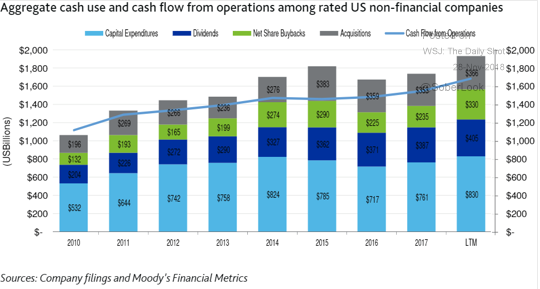